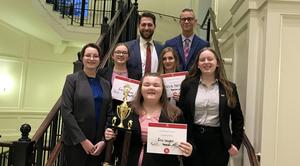 "We have now finished this tournament in second place twice and third place once (all undefeated records). The final overall ranking was decided by a points tie-breaker," said Andy Janig, Reading teacher and coach.

This year’s competition featured 28 teams from across the state including teams that have been multiple state champions and national competitors.

Additional team members include Grace Longworth (who missed out on the exclusive best double witness award on a tiebreaker), Julie Thomas, and Jakob Allen--all who did an outstanding job!

Next up, The Buckeye Brawl at The Ohio State University, January 4. Good luck, Blue Devils. We are so proud of you!

Pictured is our Reading team with their runner-up trophy along with tournament director and 2012 Reading grad Ben Sandlin, Esq. Ben was active in the mock trial program when he was a student at Reading.