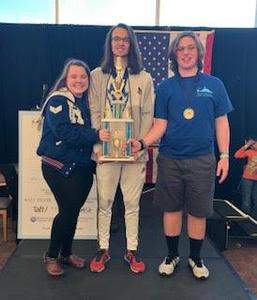 Congratulations to the Reading Chess Club members who participated in the Queen City Classic Chess Tournament at Paul Brown Stadium. The team of RMS sixth graders placed 5th out of 15 teams, a great showing considering this was the first tournament for all of the team members.

The sixth graders scored a total of 19.5 points combined, although only the top 3 high scores count for team score. William Moeggenberg had the high score of 3 wins and one tie for 3.5 points, placing him 11th out of 80 players in the sixth-grade division. Cain Evans had 3 wins and Ella Roberts scored 2.5 points to give Reading a team score of 9 points that was only 2 points away from first place.

RMS Chess Club members who competed in the 7th through 9th-grade division also placed 5th   out of 17 teams for their team score. Jacob Allen and Jayden Morris each had 3 wins and Tristian Evans and Chris Powers each had 2 wins for a team score of 8. This was a highly competitive division with 95 players from three grade levels all competing in the same category.

The players all gained experience that may take them further in years to come.  The Reading High School players competing in the 10th through 12th-grade division brought home a first-place team trophy out of six schools.  Jeremy Easter led the team in points with 4 wins that also placed him first overall in individual points out of 31 players. Jonathon Powers had 3.5 points coming in 6th place and Makayla Lawson had 3 wins to place 10th.  Their scores combined for the team’s 10.5 points first-place victory.

Congratulations to all Chess Club members and we look forward to hearing about more success in years to come.